A Bat with Rabies and Political Uprising

It isn’t the most awe-inspiring or word-provoking of places I have wrote, but the small gray table with a window to the right (mountains within squinting distance, small parking lot immediately to the side) provides a station for my verbiage as I compose near the ending of this journey which has lead me to here and now.

It is not the roasted chicken salad with honey mustard sauce, the postcards I purchased or the morning omelets with Brodie that is knotting my stomach- it is the realization that the time I thought would be long and slow ended up being quick and wonderful. It is the knowledge that for all my dissent and moaning about the US of A and the rock solid belief that I already knew the most wonderful people that existed, I am wronged. My ego is once again reduced to a hamburger like mush as I humble myself before the universe (and my computer screen).

Never did I anticipate liking Salt Lake or finding the amazing bike rides. Nor did I expect enjoying the massive warehouse, the silent but delightful bike mechanics or the crews of the trips I ran. I didn’t think that driving in the car for days at a time would be therapeutic and would provide me with a forum to answer the most basic of questions (at which small town should I stop for coffee next?) to the most complex (where do I want to be in ten years?) and also provide a common ground to a group of strangers as we buggy lug back and forth across a nation to which I originally (and arrogantly) believed I had already seen it all (or most important parts thereof). I didn’t think that people would capture my interest, capture my heart and capture my memories that will hold steady through the upcoming months and years. (Especially that of my first roommate who stayed with my for a majority of the journey. It was Morgan who taught me why you should invest in $80 wine. It was Morgan who mercilessly made fun of my accent and ‘oh yas’ –which are apparently not common in US slang- It was Morgan who joined me on morning runs, laughter and food. Morgan convinced me to stop at Ozark land and buy a t-shirt, Morgan who loved to dance in Nashville and Morgan who helped me pull over somewhere in the middle of Kansas and tape my broken camping trailer awning back to the trailer, and 10 miles later helped me rip the same awning off the trailer. Morgan, now in Thailand, here’s to you!)

So I am rendered wrong and ready to return home to Calgary after five and a half weeks –cough, cough, six months- of absence. I anticipate having left in summer and returning in winter. I look forward to the presence of my family and friends and sharing the ‘simple pleasures’ otherwise forgotten during a five-week whirlwind: a cup of tea and a good conversation (um, or wine), reading SLAM Sports at my leisure, a full Olympic distance swimming pool and more then 4 colors of t-shirts. This, I feel, might be a slice of heaven on earth.

So I remain, gray table, words abound, ready for the last leg of my journey home. 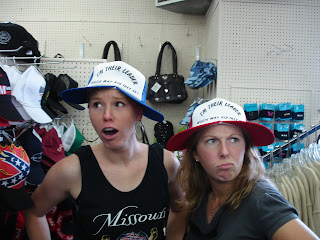 Morgan (left) and Jess at Ozarkland. Their hats say "I'M THEIR LEADER. Why are they lost?"
Gwen Stefani’s ‘What are you waiting for’ music video begins with a shot of her lying in bed. Her blonde hair is disheveled and her perfect lips are moaning into the receiver of her Razor cell phone (at the time not yet released in the United States) and she is crooning, viagra 100mg “but I’m SOOOOOO not inspired. Don’t make me write I’m SOOOOOO not inspired.” She hangs up and pulls the blankets over her head. The music begins. Genius, in the musical popular culture sense, ensues.

So now I’m Gwen, moaning into my blog on a rainy Friday evening in Berkeley that I’m SOOOOooooo not inspired to write my assignments for Backroads (the reason I stayed in California). I have the research. I have the people who’ve been to the various destinations (Bali, South Africa and Botsawana) and yet my mind is drawing vast spaces of blankness. In different shades of black, white and gray lay my half composed words strewn amidst various sentences (Should FIFA continually give World Cup bids to nations only beginning to develop their tourism?) and vague thoughts on my life (Around the World Plane ticket? Half Iron Man California- compete? Sunshine Mountain Ski Rentals?). So I sit, California darkness upon me, brooding over making these paragraphs into logical wholes.

Berkeley is full of character inspiration, fortunately for those of us who seem to be cursed with temporary writers block. There are the unusual homes in various colors schemes (although I am still searching for an entirely orange house so far my morning bike rides have given me no such luck) and streets with no logical order, other then Shaddok (which would be the equivalent of Edmonton’s Whyte Avenue) which connects to University and the campus of Cal Berkeley (which is another blog entirely) the streets a blend of otherwise dead presidents mixed in with obvious Mexican influence. There are tiny cutesy stores and diners mixed in with coffee shops, and Taquerias are almost as plentiful as espresso- clearly Berkely-ites need to be taco-ed as much as they need to be caffeinated. I located a Taqueria in Berkeley on the corner of Hearst and Shaddock that sells Rice and Bean taco that fills an entire plate for the extremely reasonable price of $3. For an extra $1 you can get enough Guacamole to cover the entire taco and make a small green mountain of edible goodness. It is a pile of real Mexican deliciousness.

California continues to grow on me as I continue to reflect on my eight days down the coastline. The more comfortable I am in Berkeley the more I entertain the notion that I should write a letter to the American government suggesting that California seek separation status (not unlike the common Quebec shuffle) so I could live here in the Republic of California, proud walking bear on flag and all. Walking down the street to work today I stopped to read two signs posted on a pole near the grocery store. One poster claimed ‘ENDLESS WAR’ with ‘LESS’ crossed out and ‘THIS’ inserted. A rally of protest for the Iraq war is taking place on October 27th at the Civic Centre (I make a mental note to remember it that day). The second poster was a small bat hand drawn with a description saying that a Bat with Rabies had been found in the area, and that if you have recently had any bites or run ins with a bat to seek immediate medical attention. I am curious how many Berkeley-ites have run ins with bats. Is this a common occurance? I am puzzled how two posters can hold my attention and yet I can’t compose a thoughtful and conversation-evoking piece for my employer. Now it is time to cue Gwen Stefani’s music… perhaps my own genius will follow.