It was an accident and the details of how it happened exactly remain foggy, but Hillary and I got hooked on Alias in the winter of 2002. A television show that was one part science fiction and a little bit romance; with a weaving plot line and sensational cast of characters. We were hooked. We followed the show from Sunday night slots to Wednesday to Thursday, the show's ratings growing steadily and the stars of JJ Abrams and Jennifer Garner rising. I loved the kick ass heroine of Sydney Bristow, so much in fact that I created an alias for myself around her for my bar frequenting years. The details of her character are cards I keep close to my chest, possibly only with "Elle" knowing the true details. 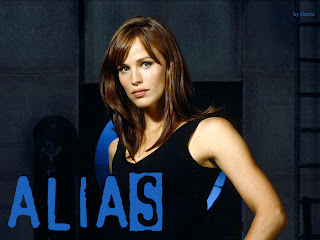 All that aside, I got fairly attached to the show. Hillary and I wouldn't ever miss an episode, and often after they were over we'd sit and decompress from the exciting heart pounding hour. I adored the characters, and I could hardly wait to see what happened next. I was so attached, in fact, when one of the lead characters was killed off the show in season four I cried for several days. Just ask my siblings as they were with me watching that fateful episode with that shooting and watched my meltdown.
It seems senseless that I would become attached to fictional TV characters, and Alias had a special kind of stickability in me that was extra profound. These weren't just made up characters, they felt like my friends. When the show ended I had a little pocket of sadness in me, because I knew I'd miss the story, being drawn into the ever changing shape of the plot, and the "people" in it I'd come to love.
Although I have followed other TV shows on and off since then, no other one has landed quite the same way in my heart. That was, until just recently.
At the end of September, when triathlon club was on break, Jon was away, and then I battled a whopper of a flu, I had a little spare time on my hands. Time where I needed to lay low and relax. I looked through Jon's mega box of movies -he has hundreds- and landed on something light, something funny, something that I could watch a little bit here and there. I landed on the TV show The Office.
I'd seen a few so I knew a bit of the story line, but I wasn't a faithful follower. What better way to spend a few hours battling fever then downloading the first couple seasons to my laptop?
Boom, here we are here. I ploughed through the first two seasons and into the third, watching with a zeal and delight that previously had been reserved for Alias. I would bait myself with things; if you do this chore you can watch an episode of the office, if you deal with your online banking you can watch an episode of the office, and on and on. I started to slow down in season four, one; because Jim and Pam are finally dating, and two; because I only have season four. No five, or six, or however long it goes.
Being that I didn't watch much TV over the past 4.5 years while trip leading and traveling around, I am easily justifying this little Office rampage. But for the record, there is no bad-ass, gun yielding, man beater-uper in this one like Sydney. Girl, you got a special place in my heart.

To the one I left behind

Snow in the Wheels