20.5km. I can see the gas station in the distance.

21km. I see a cluster of teens in all black hanging out near a corner. It must be a gas station!

21.4km is what my odometer reads as I pull into Mohawk, at 12:19am. There is an ambulance and taxi also filling up. I feel a palpable sense of relief. I drove home, and tapped my bright red finger nails on the steering wheel. Back up island, into the darkness of our little community. I picked a bold red earlier in the day during my nail appointment, a birthday treat to myself. I had looked to the bottom of the nail polish bottle, as I usually do, to ensure the name was interesting enough to earn a colour swatch on my body for a week or so. The colour? Abundance. I chose it, chose 28 to be an abundant year. This was my last thought as I swallowed a couple big spoonfuls of syrup and fell into bed, where I had a modest, if not someone broken by coughing, sleep.

As I wait for that Abundance to find me in every form, I feel grateful. You can now begin, most excellent 28th year! 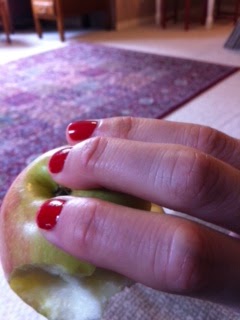 The red of abundance!