“I’m terrified of my Half Ironman” 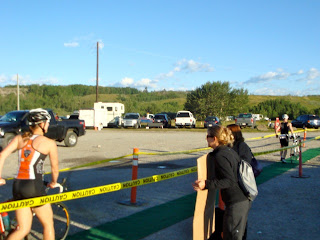 Mum with her Go Faster Holly sign in T1. 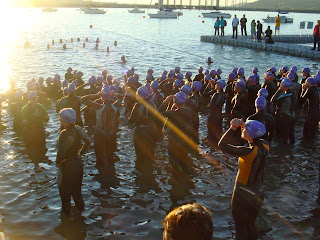 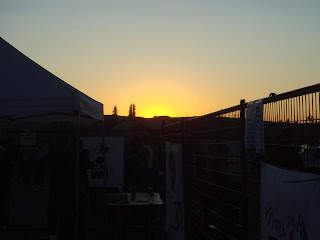 The sun rises at Ghost Lake. 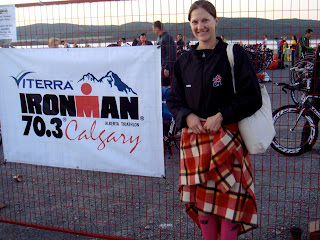 Will wear warmer clothes next time. The morning was cold! 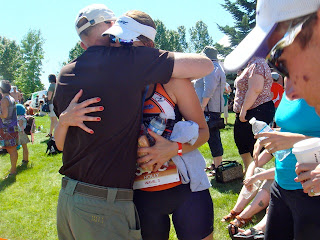 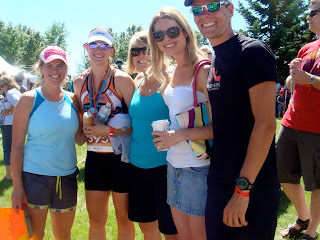 World's best pit crew. The guy on the far right is especially loud! 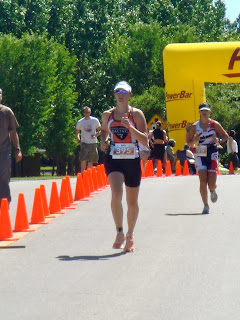 Part of the longest km of my life. 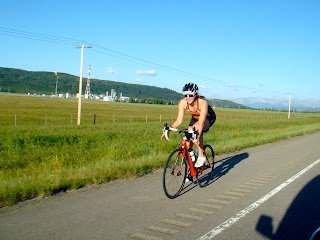 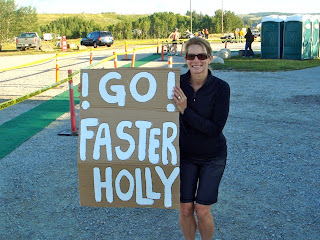 When I googled the phrase earlier in the week my search left me empty handed for what I was looking for. I was linked to forums of people bemoaning open water swimming, viagra dosage mass starts, and transitions, and general anxiety about their first triathlon. I was linked to race promotion sights, triathlon clubs and the almighty ironman website itself. I find it hard to believe someone hasn’t tackled the topic out there in cyberspace, or more appropriately, tri-geek land. I am sure they have; writing long and witty compositions on web forums or for triathlon magazines to be published into age group articles, about other (somewhat) experienced triathletes dipping their toes into a new distance.
So I find myself in a peculiar dilemma as the time draws nearer to 6:45am on Sunday, July 31st, 2011. I’m not a rookie of this sport, having had success and failure at the Sprint and Olympic distance. I’m not a pro and do not desire to be. I’m not hoping on Sunday to qualify for Kona or Las Vegas or win my age group. And yet, I have every intention of going out and displaying the full throttle of athleticism I think- and hope- I am capable of. The challenge for me is: I don’t know what that is. How different is an Olympic distance triathlon going to be than a Half Ironman?
With Olympic distance racing, I know the difference between 1:40s and 1:55s in the water. I can sense almost to the 0.5km speed I am cruising at on the bike. I know how to handle wind and no pass zones and when to gel and when to drink and when to spin out. I know what a ten km run feels like after a bike at race pace, I know that I find the red line, and then I sit just under it, and pray to God I can hold on. It’s a brutal, ugly, painful suffering. But I know it; the feeling that starts as a creeping tingling and slowly spreads from the top of your head to your fingertips to your toes. The feeling that you have put yourself into a tiny box of pain, your box of pain, where you sit and suffer and hope you can simply manage that pain until you cross the finish line, at which time you can crawl or walk or cry or eat. You sit in the pain, you talk to it, coo to it, make friends with it. I have found cursing this pain only makes it worse, more frightening, more alive. I try to sit with it. Not name the pain, nor judge it. It will come, I am always ready, and I try to welcome it the best I can.
I ask myself, will I put myself into that box of pain and suffering for six hours? Is that even possible to maintain? Can I swim with the fast women and sit in a draft, or will I end up blazing a new swim path with a second or third pack that forms? Will I suffer under the heat? The altitude? Have I trained enough? Have I trained too much? Did I taper right? Did I eat the right things? Will my race day nutrition hold up? Are my shorter distance triathlons going to pale in comparison to a bigger, longer beast of a half? Can I race this race, or am I going to end up just participating in it, or worse yet just finishing it? These questions, are the threads of uncertainty in my half iron experience, is keeping my heart beating steadily above its resting heart rate while I am trying to relax and go to sleep at night.
My landlady and I had a chat a few days ago in our backyard as I went out to empty the compost. She was wishing me luck and shaking her head. “Can you believe you’re going to run a WHOLE HALF MARATHON after all that swimming and biking?!” I pursed my lips. I hadn’t really thought of it that way. I can’t. Like Mike encouraged me at Parksville 360; this journey is like eating an elephant. You have to eat it one bite at a time. I think I may have laughed after he said that, but I understand. I have tried to draw on some of the longer rides and runs for strength, remembering the tiny struggles in those sessions. Contemplating the strife often dealt with in training, I try to instil in my own head those very difficult sessions are the very ones that have prepared me to draw my sword and dawn my armour for a longer, more trying battle that lay ahead.
So I sit with my terror the same way I try to sit with my race pain. I greet it, I am sitting with it, I allow myself to experience its totality. I am letting it be. I can’t push it down or back or away, I just let myself feel what I feel, and give myself permission to be terrified. Once the gun goes, and the swim starts, I will just be another athlete and it will just be another triathlon. But this one will be special for me, because it will be my first Half Ironman.
Terrified or not.