I recall leaving Italy the first time in 2006 I was antsy to escape the melancholy it produced in my body. A sadness and a coldness like when it rains for a whole week and you cannot escape the Grey clouds and constant dribble. Was it the high, dark buildings? Was it the crumbling walls and old places? Was it the silence between myself and Italians, unable to communicate properly to each other? Why was it Italy left me cold then?

Despite the incredible vacation that time where Italy marked the end, the country itself left plenty to be desired in me. Big cities, full of tourists and rowdy loud crowds full of camera-happy folks of all ages didn't do much for my love of the area.

This time leaving Italy feels much different. There is a melancholy in me produced by the goodness I found here and the little life that I produced. Its leaving a familiar town, a familiar gym (even if all the equipment is from the 80s and Rocky dubbed over in Italian is always playing on the little TV by the weight trees), the Eurospar and Barbra's coffee place. Its leaving weeks of struggling with school and working through school. Leaving some of the most beautiful bike rides of my entire life, and the satisfaction that comes with their completion (and the need to come back and finish the ride jokingly dubbed 'The Walls of Pain'). Leaving Italy this time feels like holding a palm of sand that is running through your fingers, attempting to grab at the last grains as they flow through, knowing it will be months until you can grasp at the sand again. For me... September? October? Whatever is in the Backroads cards will have me return to this destination at some point in my career.

Hillary arriving was a bright note that has been such a delight (to borrow John Pentlands favorite words) and has allowed me to stop and ponder about my time in Italia and the road ahead for me. Hillary and I have been checking out Paris these past few days, and previous to that were lucky enough to have a few days in my town (I immersed her in the Backroads Italy world for a while), a few in Roma (where we were lucky to meet with Darlene and Caitlin!) and then north to Paris (where we are now).

Hillary, after she spend several days sleeping, has been wonderful. We've had such a good time together and I was able to grip on to this piece of home and gather my own thoughts as I carry forward. We enjoyed Firenze and Roma... sans the extremely uncomfortable (perhaps the understatement of the decade) train ride from Rome to Paris. Does it save you money? Yes. Is it a ridiculous way to save money? I guess that is discretionary. We slept in the top bunks of a 6 sleeper for four other non-english speaking folks. The one couple had two suitcases the size of my 8 month suitcase. The one gentleman sat up and down all night (very unnerving) and our bunk the lights wouldn't properly shut off. I slept propped up on my Timbuk2 Bag; I woke up at 3am briefly wondering what was poking me in the leg. It was my sneakers and nalgene that had freed themselves from the bag and were rolling around on the bunk. Awesome. The bed was probably 5 and 8 feet long, leaving us taller folks unfortunately cramping in the hips from not extending. I had a laugh thinking of some of the tall men I know. This would have been comedy for them to fit in these bunks. What can you say? A night train from Rome to Paris was better then a 30 hour bus ride from Riga to Brussels, cough cough.

More on Paris to come, but we have coffee and pastries calling our name. And a particular shoe designer Hillary wants to check out... I bought another pair of shoes from a random place off the main drag which I need like I need a hole in the head.

Blogger won't let me post any more pictures because our connection here is too slow. At least this is an OK start.

Hillary by the Louvre, playing tourist. (We're good at it). 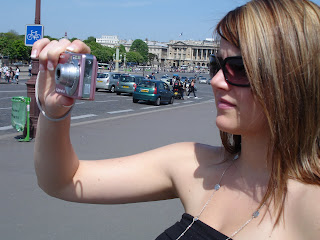 Who is the happiest girl in France? Holly... on a bike. 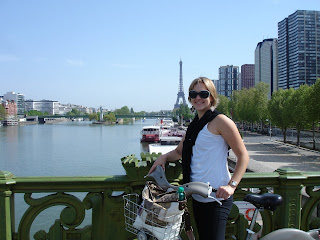 We asked a nice guy to take our picture (there are a multitude of self-portraits on the way). This is us at the top of the Eiffel Tower. 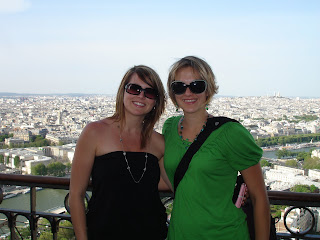