Proper names are poetry in the raw. Like all poetry they are untranslatable. ~W.H. Auden


My last name is used effectively to refer to me all the time. Beginning in Gym Class in Jr. High and sticking with me all the way through my adult sport activities, there isn’t much that beats a booming yell of HIGGGGIIINNNSS!!! It’s as tough as nails, down and dirty, bold, fabulous last name and I love it. It’s born of Irish Viking Blood after all. What could be more strong or noble?
I’ve had such a long and bold love affair with my name. I have an early memory of a teacher in elementary school telling me my name was beautiful. I immediately bought into that thought, and to this day I still believe it is. As I have grown my name has morphed, changed and been manipulated into a host of flattering and humorous (and not-so-flattering, not-so-humorous) nicknames.

For long as I can remember my family has also had a host of names for me. Holly Babba, which my parents think is fabulously amusing (after the esteemed Ali Babba), Babba (because at one time little brother Thomas couldn't pronounce Holly, but some how could fumble out Babba), Holly Doodle, Holly Dolly. Sometimes my sister will call me Dolly, Holly Doll or just Doll. She is the only one I let do that, and I really love it.
During University one of my Best Girlfriend’s (and she still is) Lisa began some real fancy footwork on my name. Thus was born the many variations : Higgs, Sniggs, Hhizzle, hizz, Higglins and Holl. Previously I had shuttered when people dropped the ‘Y’ from Holly, but with Lisa it just worked. Nicki, Mindy and Jody call me Holls. Kirsty calls me Holly Higgs, something that fondly began in our early lululemon days together. Wayne will let roll a Higgster, which came to be during a week of leading together in Italy. Also born in around this time was H2, Double H and H Squared. I thought by 25 I had heard every variation possible on the letters in my name until I met Brad Miller. After a day of washing bike helmets together in the France warehouse, he started calling me Higgy Babby. I squealed with delight when I saw him this past fall for the first time in two years. He met me at the leader house with a hug and my nickname, he being the only one with exclusive rights to Higgy Baby.
This past summer I worked with a new leader. Big eyed, blonde haired and adorable in his boyish, goofy way, we worked a large family trip towards the end of the summer. Unfortunately his first year of work with the company had many large bumps, and he constantly muttered and shook his head and said that things weren't going his way. It's like you have a storm cloud over you, I said, in a brilliant flash I yelled out loud: YOU ARE LITTLE MATTY STORM CLOUD! I bent over, in hysterics at my own nicknaming ability humour. The other two working with us thought it was pretty funny too. Imagine my delight when I ran into another leader this fall who casually mentioned, hey, have you met Little Matty Storm Cloud? I gave him that nickname! I practically shouted, literally leaping up to give myself a whopper of a self- high five.
All the changes to my name have come from people I know and love. Of the entire aforementioned list, there are no nicknames that I picked, tried out and decided on. People who loved me (or at the very least liked me and spent some time with me) worked my name around for its own term of endearment or affection. A little slice of intimacy, I discovered, when I was nicknamed by someone. The comfort level and rapport must exist between the two people involved in the slicing, dicing, addition or subtraction that creates anew a reference to someone.
Being in a new city I am hyper aware of the things I do not have. A big one is girlfriends. I am so lucky to be here with Jon, but he is a poor substitute for a girlfriend when it comes to things like: getting manicures, going for bike rides that are under 250Watts, shopping, drinking wine AND eating chocolate at the same time, watching chick flicks and The Bachelor. I am aware that making friends and getting to a comfort level where you can tease, chide and nickname each other takes time.


Every time I meet someone here - with a handshake or hug- I am Holly Higgins. At some point in time there will be a Victoria friend that abbreviates or changes a bit of it for a new nickname, something I will greatly look forward to.


For the time being I remain.
Yours,
Holly Higgins 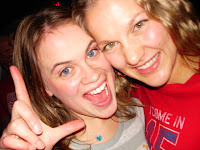 it started with a flat tire