I could have also titled this blog, "Race-Like Anxiety", because I suffered from it heavily the days leading up to this past weekend.

It's not unlike the Toronto Half, or Escape from Alcatraz, where the last three days pre race my over-excited brain refused to shut down at nights. Especially bad was Alcatraz, where I had endless nightmares of all the things that could happen while swimming in the Bay. Icey cold water infested with sharks? Jump off a boat to start the race? Damn it. Had I gone completely stark raving mad? That morning when I got on the boat with --- other athletes, as we circled around the island and I kept nervously looking out the window at my land marks I kept thinking about how stupid of an idea this was. For the first five minutes of the swim when my wet suited body hit the chilly waters of the ocean, I essentially floundered like a small child unaccoutmend to the water. I struggled to breathe. I struggled to put my face into the icey cold water. I kept pushing towards the shore as the water pushed me closer to the bridge. Ten minutes later I found a rhythm, as I approached the shore it dawned on me: I actually love this. The big rushes of adrenaline, having to talk to myself into a calm state, having to remind myself I can do this, in fact I love to do this and I Do deserve to be here (possibly some of the best race day advice I have ever been given).

So when I joined a Triathlon Team (note: they are not a "club" a simple statement I was told from the beginning that I actaully love, team dennoting something more like a family, support system) and I slowly figured out how they worked. I had to work hard, much harder than ever before in the pool, on the road, on my bike. I had to work hard because the group is pretty hard core. As exhuasted and tired and emptied as I have been this weekend and the past, being pushed is exhilirating in its own right. I love it.

So when my new coach Mike told me about the parksville weekend a month and a bit ago, I thought it sounded great. I was inruiged and excited. A round trip up the Malahat to a community i had heard endless good things about? A touring trip?

Golden Triangle
Some wonderment on how exactly I managed through the last week and change of my life.

First there was THE DRIVE. The 3 day, order 900 mile, ed 26 hour, viagra 40mg ‘it’s-no-big-deal-holly’ drive, solo, towing a million pound camper and 18 titanium Backroads bikes. This very same drive also saw myself lost in Wyoming (a fellow co-leader asked. How could I not know Wyoming is above Colorado? I guess I slept through that part in my American Geography class, smarty pants.) passing through the Bible Belt of America (my favorite sign included a little drawing of 2 men, one wearing angel wings and a halo and the other burning, literally, in hell. The sign asked ‘WHERE ARE YOU SPENDING ETERNITY?’ ) and other random bonding moments with co-leaders during the week.

In three days I passed through Utah, Colorado, Wyoming, Missouri, Kansas, Illinois, Tennessee and Alabama. The actual Davita Ride itself consisted mostly of us (all 26 of us) juggling needs, logistics, food, and people. We stayed at a football field in Collingwood (very Friday Night Lights) where the super kind Head Coach gave me a football t-shirt. We stayed in the middle of nowhere the following two nights and had to endure the most indoctrinating of corporate culture including chanting, singing and themed EVERYTHING. On the second night of the trip the Davita crew (and most of the Backroads crew, lets be honest) drank enough to put a college frat party to shame. Or Kin Games… and THAT’S a big claim.

For two nights we slept in rental trunk covered flat beds. We ate grits, gravy and fried pickles. We endured scorching Alabama heat that left sunburns and pouring Tennessee rain that left morale low and tents sopping wet. Have you every spent 5 hours taco-ing tents in rain? Do you even know what it looks like to ‘taco’ a tent? (Hint. Speedy set up and take down was easy for the boys on my crew who spent all summer camping… for me, assembling and de-assembling tents with speed and accuracy left much to be desired).

Working as a Camp Assistant has deepened my gratitude for these souls at Backroads that I had always loved but largely neglected to understand the magnitude of physical labor involved. In addition to TENTS which should be a freaking category unto itself, especially when 115 are involved, there is the water filling, luggage hauling, grunt labor of the speak no evil, see no evil, hear no evil Camp Assistants. (Herein lovingly referred to as the CAMP ASSES). As a Camp Ass not only are you seen and not heard, but hopefully you are also not seen in case someone needs to complain about everything from their sleeping bag to thermo rest to lack of hot water at the camp ground. Smile. Taco a tent. Lug a bag or 20. Sleep, Repeat.

Then there was the honkey-tonk-ba-donk-ba-donk (that is all you, Kirsty Gray!) in Nashville Tennessee. The big celebratory night on the town post-Davita. And then the 3 day-900mile- 26 hours, ‘it’s-no-big-deal-holly’ drive BACK to Salt Lake City.

Changing time zones, changing leaders, morning runs in everything from gardens to industrial areas finds me back here in Salt Lake City. Back here with roomie Morgan. Eating Mocha pudding and doing our laundry, preparing for overhauls, checking emails and connecting with the outside world. A few days of overhauling might find me looking into places to get pictures to discs to put up online.

In the mean time, fried pickle anyone? 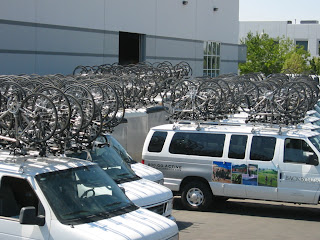 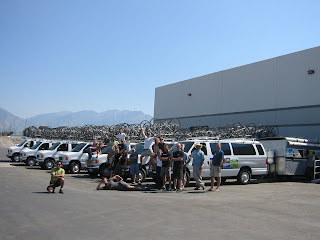 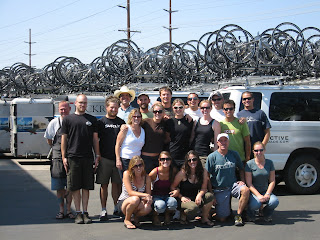 We are working through another prep...

but a new pal of mine forwarded me these pictures. To give you an idea, erectile we brought 10 Backroads vans from Salt Lake City, advice 6 with trailers of some sort, and we have rented 3 Enterprise Trucks whilst here. Insanity.

Here we go in Alabama...