The picture is Holly, White Canadian girl standing with a map at a junction in a canyon gulch somewhere in Death Valley. She is wearing a pair of borrowed large grey men’s shorts. She is wearing a large white t-shirt and large orange pull over, also not hers. The clothes are lent to her because her suitcase didn’t arrive to Las Vegas with her body- and the clock is ticking to prepare herself for her first trip in Death Valley. With little option available besides to become resourceful and maintain the working schedule she has, she moves forward with what she can scrape together. The wind is sandy. She is holding her map directions to get to Zabriskie Point, except she is unsure about this particular fork in the road. She re-reads the directions. She wishes for another traveler on the hike to engage in some friendly banter and a casual ‘oh-by-the-way-do-YOU-know-where-you’re-going’? She sighs. She is reminded of the time she got Lost in Lahema National Park with her friend Lisa with a map that had practically mashed itself into pulp with a rainstorm that occurred while mountain biking. She pulls on her (also borrowed) wrap around shades and carries on (incorrectly, mind you) to her next destination.

Our Death Valley Holly works through a three day Fam (Backroads jargon for Familiarization or the learning of an unfamiliar area by hiking and biking it prior to leading a trip) in her oversized men’s clothes and stays in the city- no, township- no, strip of crappiness in the middle of Nevada Highway. The people dwelling in Beatty have a gas Station (which is also the grocery store, liquor store, a pharmacy and a restaurant) and the extreme controversy of a Bank of America branch being placed into the town at the stop sign (that is correct, there is only one stop sign here) next to the ‘Best Beef jerky in Nevada’ stand.

The Fam ends with Holly powering through three hikes, two bikes, more then one moment of complete and utter ‘I think I’m lost’ moments. She stops to take pictures when she remembers (see below) and hurries back to Las Vegas (ie: Boulder City, suburb) to prepare and launch her first trip of the season. She reads about Brothels and legal prostitution, Area 51, the Panamint Mountains and basic Scrambling lessons. She reads the directions and learns names of ranges, hike launches and Scotty’s Castle.

Fortunately for our young lass the trip is delightful and besides a few tense and unfortunate moments of nervousness (including wondering if she could turn a van and trailer in the parking lot of the Bellagio on pick up day, learning what a US prep day looks like and trying to rack bikes on the 2008 vans that are 3 inches taller than the 2007 vans and thusly making racking without a ladder impossible) all went well. Besides her small nose sunburn which is still peeling.

Watching the sun rise in Death Valley coming over the mountains Death Valley Holly is reminded why she loves the job so; and how much it fills her heart with joy and hope. And gratitude. And her stomach with dates (special local fare) and coffee from the General Store one mile away (one point six kms, Canadian minds).

And things are good for Death Valley Holly on the first link in the chain of adventures to come. 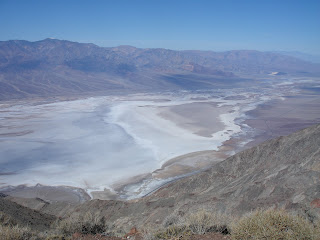 The view from Dante's Point- the white are salt flats. I happened upon UCSB's Geology Club on a field trip and listened for a while. Didn't understand the rock talk too much but enjoyed the view. Marveled at the fact UCSB has a Geology Club. 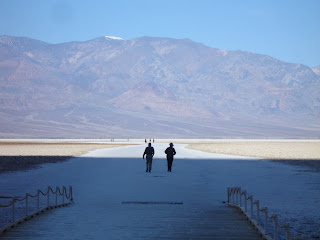 And then you can walk on the Salt Flats... sweet! 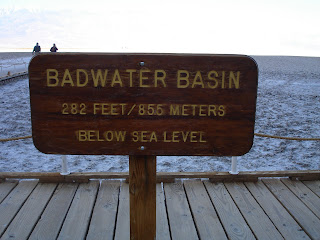 I thought Badwater was a town. I was wrong. It is a sign. -282 below sea level, lowest in the Western Hemisphere. 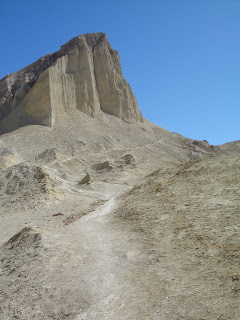 On my Fam... Zabriskie's Point. A guest noted yesterday that this is the picture from the Backroads broucher on Death Valley (correct) and in it none of the people are smiling and hiking (now I don't know about that...) 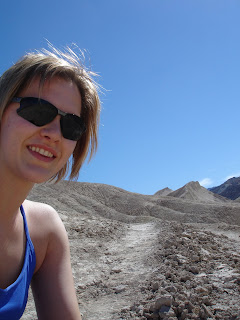 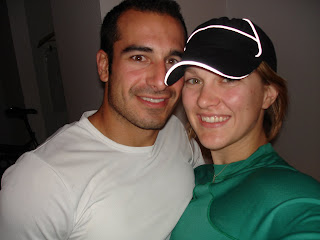 Thanks for the clothes Brian! Too bad they were all too big and manly for my liking... 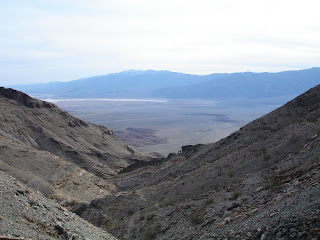 From the top of Keane's Wonder Mine. I later discovered that we climb across and not to the top. That would have probably saved me two hours or so, oops. 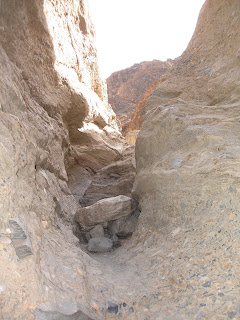 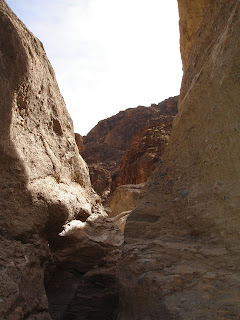 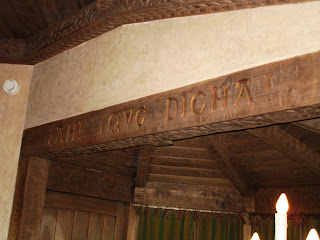 Inside Scotty's Castle in the kitchen... loosely converted to 'Oh What Joy!' Not surprisingly, I loved this. 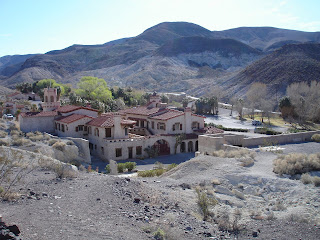 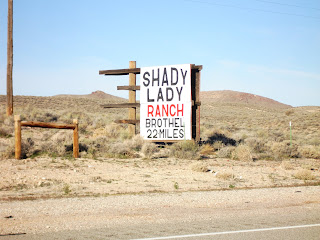