Cultural Studies ruined me in third year University. Not only did I give up on Walmart forever, (seven years and two months and still going strong) but I became extremely brand slash socially conscious about consuming. Especially when companies had big, bad reps for exploiting third world countries for cheap labour, poor CSR practises and a general non compliance to "the rules". One of the companies I learned which has this wrap is none other than the grand ol' athletic giant. You know, the one with the big swoosh.

Not to say other companies haven't been poor with labour laws, off shore production and other eyebrow scrunching, stomach-knotting business practises. I am swift enough to know the larger the company the more likely there lurks a small-cough-large mess and an ugly off-shore production somewhere. I try to pick my spending battles wisely, but I suppose if I only bought clothing from completely morally upright companies I might be currently wearing potato sacks and smelling like chicken coop.

Enter to this post my lovely boyfriend and his love habit of wearing recycled clothing items. (This resourcefulness and simplicity is one of the many things I love about him. The man only owns one pair of jeans. Let's sit on this, folks.) He has a few warm weather run/ cycle items, including a pair of electric blue bib tights, that when I first saw I wrinkled my nose, but after feeling the furry inside, decided in this case he could forfeit fashion for function. In addition to this he favours his half decade old MEC pants with rips in the sides, his Dad's cycling booties from the 1980s and a ligher blue lulu jacket with huge rips in the side. "I went bush-wacking" he tells me about the rips so earnestly I can only shake my head.

Turns out I am not the only one that sometimes shakes my head at his choice of workout attire. A couple weeks ago after a run workout Simon told Jon he looked like a bum, and then invited him to come over and get a few of his old run pieces so he may be better equiped (and also more professional looking, perhaps?) for the Victoria outdoors. Jon came home with a load greater than what I imagine to be The Kardashian family gift exchange at Christmas time. His new load of gear including a half dozen pair pants/run tights, hoodies, dry-fit shirts, jerseys and rain gear. He also got a new suitcase. Pretty generous and kind. As we started to go through the suitcase full of new clothes he had accuired, I noticed a trend.

Two of Jon's team mates are sponsored by them. The brand I was ignoring and have been since Cultural Studies. And almost ALL of our new gear accquired had the swoosh. I felt a little bit of cold sweat on the back of my neck. All this amazing stuff. From THAT company. I picked at Jon for information. How had the other two been sponsored? What did they get exactly? Although Jon didn't know everything for certain, he did know one very important thing. The company I loathed was amazing to it's sponsored athletes.

Living with a poor, sponsored athlete myself, I spend time watching him manage his money so carefully. He has to be so incredible concise in choosing his gear, clothing, bike parts, nutrition and everything with the money and sponsorship he does have. I recognized early on in our relationship that a brand that sponsored Jon would also earn my dollar too. They were giving him something, but it small or large, to finance his dream. Because he is dedicated to a sport where there isn't a multi-million dollar signing bonus or media appearances, a new wetsuit, free gels and cheap sneakers are incredibly appreciated.

This (formerly terrible) company sends their athletes new clothes, specific to their sport. They let the athlete choose several pairs of running shoes. They get whatever resources they can to assist the athlete with in the training of their sport. In short, they are a huge help. Probably the sponsorship agreement with the company is a little bit different with this guy then with other amateur triathletes, but a new appreciation is fostered for the brand I had so specifically targeted not to consume. I may be brand aware, company aware, strong in my consumer sense but the practicality of our day to day reality hangs heavier. The gear is state of the art. It's water proof, wind proof, potentially bullet proof.

Instead of thinking of this as a LOSS inside the part of me that is my Cultural Studies induced moral compass I'm trying to think of it as a compromise. Especially when the shirts with the too short sleeves don't fit Jon-long-limbs, they do fit Holly-long-limbs. 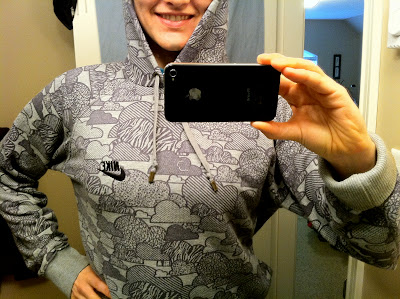 Interbike and Lessons in Feminism

The opposite of adult chores