On Friday night I had a panic attack.

I haven’t had one in years. Well, it could be argued that much of 2011 was a constant, mild panic attack. This is what happened. Wake up, clock says 1:24am. Feel head spinning dizzy. Problems inhaling completely. Thoughts running wild through my head. So out of bed I hauled myself and to the front door, where I stuck my head out and heaved brisk Calgary air until the feeling passed.

I came back inside and sat on our couch. I looked around the room. I wrote down a few sentences of what was making me anxious. A new job, a new home, so many things to do, to learn, a training routine to reestablish, addresses to be changed. I put down my pen after a few moments and paused, feeling better. My eyes settled on a small pink object across the room and I started to giggle. I giggled until I laughed, laughed until my face hurt, and then I was able to go back to bed.

The pink object in questions was this. 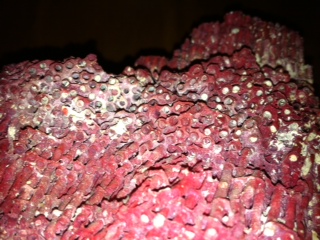 A week and a bit ago, Crystal and myself had been doing a mad cleaning of the place as we had just moved in. I saw the small pink hunk on the bookshelf and wrinkled my nose. It was the size of a couple baseballs put together and had the look of an old rotting trinket once purchased at a flea market. I took a look at it and decided it was A. an old something of Jon's, inconsequential in nature because I had never seen it or heard of it before; or B. something the previous tenants had left behind (although I was fairly sure I hadn't seen it during the walk through, that whole period of time is a blur). Without to much of a thought, I tossed it into a large black garbage bag we were using. End of story.

Jon asks me a few days later, in the kitchen, if I have seen his piece of The Great Barrier Reef. I stopped, mid mouthful of food.

What does it look like? I asked, slowly, careful to maintain a poker face.

Jon's earnest face smiled and he held us his hands. "Oh, like this big, light pink, looks like old coral..."

Like the size of two baseballs? I asked. Somewhat old looking? Probably I'd never seen it before?

Jon looks at me directly with his big brown eyes, with the same face I imagined he used growing up to get ice cream, $5, or a ride home from swim practice from his parents.

"It's a priceless piece of The Great Barrier Reef," he explained, "my Grandma's friend brought it back from Australia for me before it became endangered and illegal to relocate it."

As soon as Jon leaves out to the garage I go, scissors in hand, and start going through the big black bags of garbage. UGH. My first bag yields no results. My second bag is different though, as in the bottom of the bag, stick to with an old swifter and some paper towels is THE GREAT BARRIER REEF. I bring it inside, lovingly scrub it, and put it back on the shelf where I found it.

I considered not telling Jon the journey it just had, but I couldn't help myself. He didn't say too much, but noted that he was glad it was back.