Hillary and I attended a wine tasting at Vine Arts last week. I’d been fortunate to experience one of these fantastic tastings before, and took little sister for her Birthday. The particular tasting we landed in was a taste of the Rhone region. We took part in an experience called "Rhone Ranger Battle" wherein we tasted and tried to determine which wine was from Rhone, and which was a Rhone Ranger- a wine styled after grapes from Rhone but from the USA. Hillary and I gleefully swished, swirled, smelled and tasted.

What was long lasting from the evening, besides the gentle buzz of delicious wine, was the Sommelier Jesse's description of Syrah coming from the Rhone. Passionately he described the growing regions, styles and fanatical differences between vineyards. But it is this that captured my attention, and stayed with me.

"Out of desperate, desolate, dire circumstances grow the most delicious wines. These vines, placed under these tremendous stresses, tend to be the vines that flourish."

I feverishly wrote this down. On my entire tasting sheet there is scribbled notes on wine, but that lasting thought I kept.

This period of life has been immensely stressful, for a variety of reasons. I've had plenty of good practise dealing with stressful periods of time, but this one has certainly been moving up the ranks as 'one of those' times. Now that April has arrived, all I can do is strap in, keep calm, and face each day, each week, each challenge, each change head on.

It helps to remember that during this time, and long after it's over, my vines will flourish. 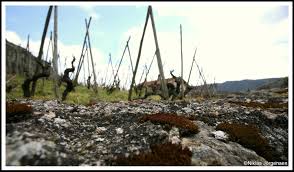 not exactly the sexiest vineyard you've ever seen...