The Same Direction: a Wedding Blog

When we were three weeks into our relationship Jon proposed that we take a trip together.
I was coming off a long haul with Backroads and was home for a couple weeks. He had found a small pocket of time to take off from training. I hardly knew him; when I reflect back it feels like a massive leap of faith to have left for five days with a guy I’d just started dating. However, my heart -wild and wandering- rarely turns down a trip, especially with my handsome new… new… uh, guy. So we packed up his car, and hit the road to go west.
In those five days I experienced a transformation of mind, and also one of heart. In retrospect, I recognize that I knew as early as those five days I wanted to marry Jon. In those moments, all I felt was an assurance unlike anything I’d experienced. I looked at him across the campsite our last night, the Juan du fuca coast splashing in waves behind him. I thought: here you are, like you’ve always been, like I’ve been waiting for you and didn’t even know it. As we trekked through British Columbia together I allowed myself to fall in love with this man, never imagining the joy our relationship would bring to me in the days and months and years ahead.
Sitting at my desk over three years later, a song from that special road trip comes on the radio and stops me typing in mid-sentence, my project momentarily suspended so I can journey back to that moment in time. I can paint the picture with a clarity I hope never dissolves. Jon, wearing his big blue wool sweater and old purple Oakley’s, smiling at me, smiling at the road ahead, driving his car with one hand extended to the wheel, another touching my knee. He is answering my questions I printed out with purple marker on white flash cards.
This past December, when Jon got down on one knee and prosed to me, I felt a happiness so profound I thought my heart may burst. But my heart didn’t burst, and we moved forward into the next phase of our relationship: planning a wedding. There was a long space of time where we just existed in bliss, with a Hawaiian backdrop. I cried at random intervals, feeling like I’d just won the lottery ten times over, believing my life couldn’t be as rich and meaningful as it was in those days.
As we begun to create our wedding, the bubble of engagement began to shrink into the practicality of planning. Times, dates, finances, traditions, lists overcame our every conversation. Tears were shed over the guest list, the costs, worries about appeasement and timelines. Somewhere in the early planning stages, after splitting a bottle of wine on Friday night, we came up with our new idea. Plan a party, and get married and surprise everyone there.
From that moment forward, our energy was funneled into planning our secret wedding. Aided by a few key players, we kept our secret from virtually everyone in our world while pulling the details together. It was my own promise to myself to do two things: actually keep the secret (which grew increasingly agonizing to keep) and contemplate and act on what I (we) wanted in our marriage. The wedding would be temporary; the day, very fast; our marriage, long-lasting.
I distanced myself from friends. I became distracted, forgetful. My commitments suffered. I’m told that some of this is normal pre-wedding stuff, but I became increasingly anxious about spilling the secret. In this time I learned about myself that (unlike my now-husband) I need to talk out what goes on in my head to really understand my own thoughts and feelings. I lay awake at night. I stopped returning emails, texts. I would trail off mid thought and when I returned to reality, one or more people would be staring at me. A mix of confusion and bewilderment registered on their faces.
We arrived on our wedding day and I experienced joy near indescribable. I no longer feared the secret. I was now a holding a powerful and exciting secret, it was a surprise I couldn’t wait to share.
We married in a wine store at 9pm. Mat made a toast that was 'The Announcement'. I wore a white wedding dress. The silence immediately following the announcement was some of the longest of my life before it wore off into cheers and happy tears. We wed in front of a mural of a circus, we proceeded a party with pizza and wine that zoomed by as if time was set on fast-forward.
Another entire blog could be devoted to the execution and actuality of the wedding, but all I can really land on now is that it was perfect. Perfect for us. The evening matched our off-beat personalities and desire to be adventurous. We floated through the evening, and I now understand what people mean when they describe their wedding as The Best Day of Their Lives.
I am back in normal life now, secret-free and excited to be embarking on another chapter in our journey together.
I look at the window into downtown Calgary and the late afternoon sun, and allow myself to press replay on the song, transporting myself back to the beginning. I can feel the glimmer of tears as my heart dances again in the time that this was, the places we’ve been, and the places I hope we will go. Beginning with a road-trip, ending with a surprise wedding, and delivering me a very special love.
Love does not consist in gazing at each other, but in looking outward together in the same direction. -Antoine de Saint-Exupery 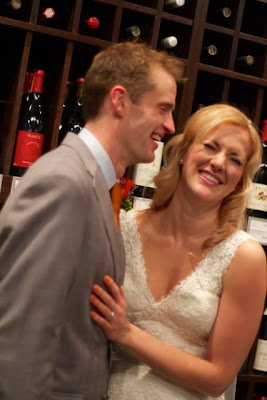