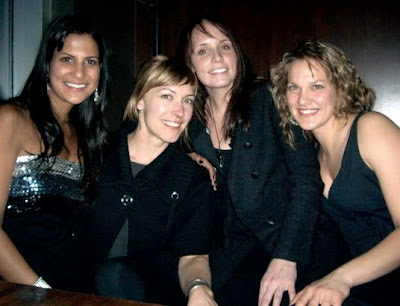 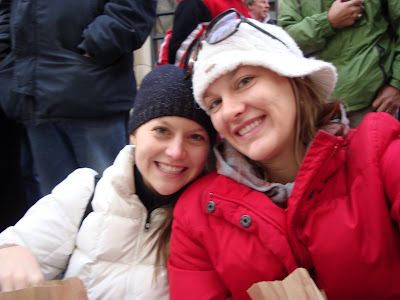 Darling Mindy and crew at her Going Away Party. There is another brave girlfriend I have- packing up her life to go to Australia for school for her Masters. Below, Hillary and I at the Grey Cup parade in Calgary.

The first time I ever raced in a triathlon I was unaware exactly how 'transition' worked. Much discussed amongst our tri swim group but mostly a mystery to me, I spent a few times swimming laps at Talisman, hoping out, and practicing a "mini transition". I would do the basic change required to continue on to the bike. However, as both a rookie to the sport and new to the entire experience, my first transition (or two) were a more than a little rocky. I was awkward with my own limbs. Dry feet? Add race belt? Strap helmet now or later? Only after a couple times did I really feel like I could 'do' the transition. To master it will take me many, many more tries (or perhaps tris?).

As the hours creep by and February is about to begin, I am contemplating the effects this next transition is about to have. Not that unlike transitioning from the water to the bike, going from grounded life in Calgary back into the ring-out-and-drip-dry of tour life can be a little shaky. I keep hoping my race will improve and the transition will be much smoother, and I wont find myself laying awake in Salt Lake City/ tent in Death Valley/ Furnace Creek Inn/Boulder City/ Las Vegas staring at the ceiling, wondering Where the Hell I am. Which isn't a very happy feeling, if you've ever suffered a case of ceiling fright yourself.

I struggle with an utter Grass is Greener complex; this anxiety is heightened always by a few months at home followed by a few months on the road. Hooray! I am in Calgary is followed closely by Hooray! I am on the open road. Damnit! I am in Calgary is followed closely by Damnit! I am on the open road. My friend Richelle would tell me to appreciate where I am. She would also tell me that everything is happening for me, not to me. I think she would conclude with a short but concise 'go out and live your life' speech which is well received (mostly) but still somewhat exasperating to me nonetheless. I am acting like I am five. Or maybe twelve. But I don't wanna pack my bags. But I don't wanna say good bye. I don't want the totality of my 2010 goals to rest on whether or not I can swing it around work. I want to go to Hong Kong. I want to race the NYC marathon. I want to go back to Ireland. I want to work in Wine Country. Whine, whine, whine! I can hardly stand the trains of thought rolling through my head as I attempt to make decisions, pack my bags and head out for round one of a big spring of hopping in and out of Death Valley (for three months to be exact).

So lucky am I my transitions will be short this time 'round, as in February I do a couple weeks and am home for a couple. My current state of procrastination reminds me of my inability to properly study for Stats or Bio-mechanics in my undergrad. The subject matter is graspable, I just don't really desire to grasp it. In those years, there is nothing a half pot of coffee or a couple cans of coke couldn't help me out with. Right now, all I desire is mint tea and ten hours of sleep. And for my 2010 goals to be finished. And for my new bike to be in Calgary. And for a ski day before I go. And for another pair of Fluevogs. And a transition that isn't as cringe-worthy and painful to go through as it has in the past when getting on your bike realizing you're not wearing your proper top and your bike shoe is undone. Sigh. 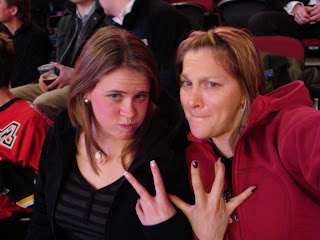 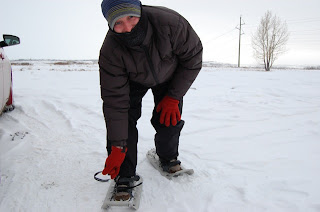 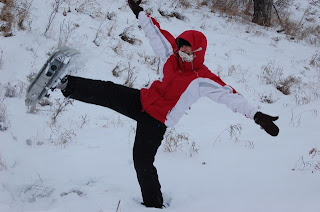 Lisa and I went to a Flames Game, Lisa won a key chain. We were over served. The Flames won. We think. Mat and I went snow shoeing. Clever, for us to go in -30C weather. At least we had the place to ourselves.