What I’ve Learned from My 30 Years in the CFL

I need to open with this because I have spent much of my life side-stepping around it. Not because I am ashamed of my father (in fact, the complete opposite), but because when you are born into a family where your personal life is your public life, there are times you wish for a personal life that is a private life (I can't even imagine what North West's life will be like). I can't say Dad is a celebrity on that ultra-hyped-Hollywood-style fame scale, but I realized very early on he was a public figure with a public job, which meant he was-and still is- up for debate and discussion in most public arenas, especially where sport is concerned.

Thanks to a little troll named Dustin Smith* (*name changed for his protection, I resisted googling him in the case I find out he is now a neurosurgeon) in third grade that I came to this realization. Dustin came up to me at recess, hands on hips, snarl on face while I pushed myself inside a tire swing.

"Your Dad SUCKS at his job!" Dustin sneered at me, waiting for a rebuttal. I didn't have one, because I was shocked. How did Dustin know who my Dad was and how he did his job?

Back in this scene at the playground, me dangling my then-short legs off the tire swing, trying to understand what was going on. This moment is so ingrained in my memory I wonder how much I internalized this and re-lived it nearly every football season since then. Dustin was the first of a long line of people who never held back on discussing my father as a coach, my father as an administrator, and my father as a director, often without never meeting him at all.

In the week and a half that has passed since Grey Cup and all of its happenings, I have been fuelling my writing and coping with my overwhelming emotions by compiling a list. On my scratch pad on my desk it's written as the title of this blog. Having attended my first football game at ten days old, and being involved in the CFL for every football season since, I like to fancy myself somewhat of a sideline expert when it comes to the sport and the league. Here is my list of what I've learned over the past 30 Football Seasons.

1. Life Will Break Your Heart. (alternative title: Life Can Be Grossly Unfair)

You will be publicly fired (or insert other difficult life event here), and it will be horribly painful. You will be shamed, mocked and verbally assaulted by people- some of it will be warranted- most of it won't. It will really hurt. It will hurt worse because you cannot control much of what is written and said. Avoiding this heartbreak is utterly inevitable. Embracing it seems to be the only way to get through. You acknowledge its presence, invite it in to stay a while. But not a long while, only long enough to locate your friends resilience, strength and hope. Then you can kick heartbreak to the curb and move on.

2. It's Not Whether You Win or Lose, But it Can Largely be About Winning and Losing.

Our family lived and died by the 'W' and 'L' categories for years. Some seasons the Ls stacked up higher than the Ws and some seasons the reverse happened. I get frustrated when I hear people say: "it's not about winning or losing, it's about how you play the game." I suppose this is probably true for high-school basketball, most intercollegiate sports and some other amateur leagues. While I wholeheartedly support the notion of playing with integrity, and to the best of your ability (herein "how you play the game"), if the points don't swing your favour on the scoreboard at the end of the night, it's a loss. And a season of 0-18 won't gain you any brownie points no matter how much integrity you played with. It CAN be about winning and losing. Life looks shiny when you win. Life looks grim when you lose. Winning hides little problems, errors, faults. Losing shines on those problems, errors and faults like a magnifying glass.

I feel as though this one doesn't require any extra explanation.

4. Don't Take Everything at Face Value.

I am constantly frustrated when I watch Sport Centre and hear of trades, hirings and firings. I am frustrated at the simplicity in which the news is delivered, from the comfortable desk position of someone with no stake in the outcome(s) of a game, a season, the playoffs. Someone how doesn't know that behind the delivering of the single seemingly small piece of news there is a radical course of action taking place. There are a thousand other dominoes falling behind the scenes; devastated or elated family members, wives, girlfriends, children. An inevitable move, a complete change of life, represented simply a small ticker on the tape scrolling over the bottom of the screen. Life is like that in all arenas. Something that may appear to be a small ticker or news might have firework-like ramifications in the background. We never really know.

5. It is good to have an On-Season and an Off-Season.

Working from 5:30am-11pm isn't possible all year round. Travelling extensively is exhausting. Rolling the same demanding routine week-in and week-out will burn even the most energetic out. It is good to be amped up, worked up, and driven. It's hard to do that for too long. Rest is good, relaxation is good, re-charing your batteries and thinking of things other than football is good, too.

6. You Can't Have Reward Without Risk.

Many folks in my circles have commented on my willingness to take risks in my life. (Heck, I'm two months into the biggest professional risk of my life). This behaviour was modelled to me by my parents: you can't have (great) reward without (great) risk. You must have courage to take scary steps. Especially if this is your life's great passion (for example, my father with football), you must to everything in your power to follow this passion. Part of the magical mystery of our life is the gifts we arrive here with, what we choose to hone as skills and what our hearts really call out to us for. If you choose to live chasing your passions, you will risk. Sometimes you will fail. And sometimes you will be amazingly rewarded. But it's not the critic who counts...

7. You Are Caught When You Fall.

My Dad always says, "Family, Faith and Something to do." For all of his years as a professional athlete, a professional coach and a professional within sport, there has always been a tomorrow, another door that opens, another pathway to walk down. Often these are appear out of nowhere at all. I don't think it matters what your faith is - or isn't- just that you believe whatever is happening is for the best. Somehow, in some unknown way, you are being spared.

This is what I believe.

This is what I've learned. 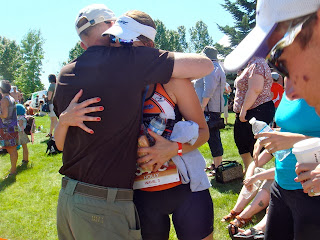 What I Learned in My First Year of Marriage

I couldn’t find the words before Christmas to wr

Has it already been two weeks since this magical r

There was never a night or a problem that could de