When push comes to shove

I had a magic trick during University. Due to the fact it worked almost 90% of the time, I adopted it, without much thought, into my post-University life.
When a deadline for a paper, project, lab or exam was looming I would do a little bit of spotty prep work. I would read the required texts, do a wee bit of research, and maybe draft a sketchy outline. I’d do a fraction of the work required to actually complete the said project.
In the eleventh hour, or when “push came to shove” (perhaps my favourite idiom of all time, thank you Grandma Ethel) and it was time to get down to it I'd put on a fantastic show. It’s 9:30pm on Wednesday and my term paper is due at 9:00am on Friday morning? Sit back and enjoy the production folks, here I go.
Working madly until all hours of the night and into the wee of the morning, fuelled only by coca-cola, expensive Second Cup lattes I could not afford and potato chips, I worked myself into a cloud of feverish dust. I would write furiously, collapsing only at the point I was re-reading the same sentence for the fifteenth time, I’d nap, wake, and continue writing. Draft, write, scratch out, and change. Draft, delete, re-write, proof. Draft, decide on a quick shower. Re-read the project, look at the clock and wonder if “4:00” means AM or PM. Then, in nothing short of a miraculous poof I’d have it; my winning paper/project/etc. One could say I was lucky, or a good paper-writer, or just a jack ass. The times I did this far outweighed the number of times I did not, and due to part of the fact my grades were excellent I had no reason to change this formula. With adrenaline and a time deadline coursing through my veins there was little I couldn’t do.

I can procrastinate with the best of them, but when it is Go Time there is no one better than I. I prided myself in my ability to hit the ground running. Since University I have also diligently worked on coaxing myself out of this anxiety riddled state and into a more preparatory state in which I attempt to spread out my working time and utilize time management wisely. I believe I am highly organized which felt counterintuitive to living in a massive ball of fire for 48 hours of time prior to getting something done. Although I am constantly to work to be always in this new, less stressful way of productivity, old habits die hard. This particular old habit is coming through loud and clear as I prepare to move from Victoria.

Our tiny home for the year doesn’t have much stuff. We came with no furniture, save a couple IKEA night stands. We each had some clothes (one of us would argue the other had a significant amount more than another) and shoes, and gear. Good lord, do we have gear. Bicycles, wetsuits, enough sneakers to outfit a high school track team, cycling and running clothes for all weather. We brought along some kitchen items, not many. We brought along some photos, paintings, décor. Not much. So why then, as I pull our stuff into our tiny dining room, do I feel a sense of sheer overwhelming wash over me when I look at our stack of what is to return to Calgary?
So I find myself late on a Friday night playing with my iPhone Starbucks app. I could wax poetic for an entire blog on why Starbucks is my favorite transnational, which goes to show just how damn good of a procrastinator I am. I would rather write and publish an essay on Starbucks, consumerism, capitalism or their marketing scheme rather than pack. All it requires is my hands, to put items into boxes. Tape them shut. Write on top. “Records” “Shoes” “Kitchen items”. That’s all I have to do. Not much more. So why then, as I shake my phone with glee – I have just discovered I can tip the gold stars out of my virtual coffee cup – am I not doing it? I am letting my free time be occupied by said app, Words with Friends (also hopelessly addicted) watching Arrested Development, and rearranging my sock drawer (not kidding).
Weighing in on the current date, and the date of my departure, and the chaos that surrounds me daily (see photo below) I foresee a 48 hour Ball of Flame moment coming on. Despite my efforts to show my mature, evolved, organized stripes, the old me can't help snickering and shining through. Coca-Cola, anyone? 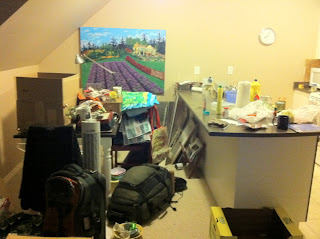 Q: “Does it rain in Ireland much?”

Some kind of Seasonal Greeting